In the 2017 season, Virginia Motorsports competed in Baja SAE Kansas and Baja SAE Illinois with the car, Bezzle.

"Through torrential rain as well as tiny, yet detrimental flaws in new designs, we managed to finish with pride."

Our first competition of the season in Pittsburg, Kansas was looking great after passing technical inspection without too much hassle, and completing all intended dynamic events. As a team, we placed 28th in the acceleration event and 21st in the maneuverability event; our goals were seeming to come true.

Being top 30 in the starting lineup was a great start to the 4 hour long endurance race until our new 'flagship' steering system took a turn for the worst near the end of the first lap. Two and a half hours later, the car had been stripped down, fixed, and reassembled. 'Bezzle' was eager to complete its first lap of the competition.

Due to the perseverance of the team through the unforeseen difficulty, the car was able to retake the track with a vengeance. Due to the amount of time lost towards fixing the car, we were only able to complete 9 laps in the remaining time.

However, thanks to our hard work in the static and dynamic events, we placed 54th overall. Although we were disappointed with the turnout of the endurance race, our team was determined to take on the competition in Illinois. 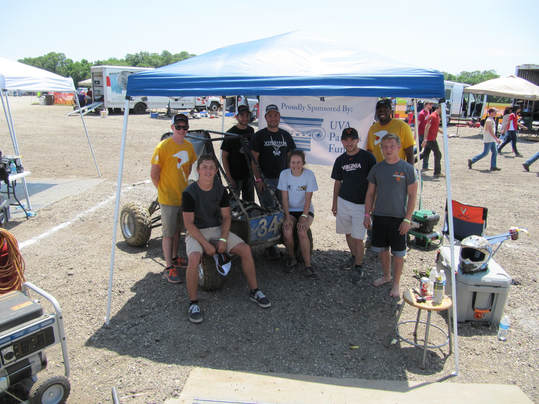 ​During the 2 weeks between competitions, we thoroughly tested the car for reliability, with an emphasis on the steering components. We knew the competition at Illinois was going to test our car even more than the first, since this competition was at the Caterpillar Research and Development Headquarters.

When we arrived, the track seemed even more treacherous than we expected with a 50 yard long boulder crawl and an almost vertical hill climb section. In the static events, we did not do as well as we hoped, but still had a chance to do well in the competition.
​
Starting about 50th in the lineup left us at a slight disadvantage because of the amount of time lost being stuck behind wrecked cars on the track. Following that setback, the treacherous track's concrete slab obstacles caught one of our wheels, leaving us with a non-repairable flat tire during lap 3.

After an hour setback during which we fixed our issue with a spare wheel from another team (Special thanks to Western Michigan), we got back in the race and really started to crank out great lap times, keeping up with most of the top 10 teams.

Thirty five laps later, our team placed 38th in the endurance race. Although our placement was further back than we had hoped, our hard work allowed us to get back in the race. The 2017 competition season was a great learning experience for all members and gave us the new-found knowledge needed to succeed in the upcoming 2018 season.