In the 2019 season, Virginia Motorsports competed in Baja SAE Tennessee and Baja SAE California with the newest car, Jocelyn. 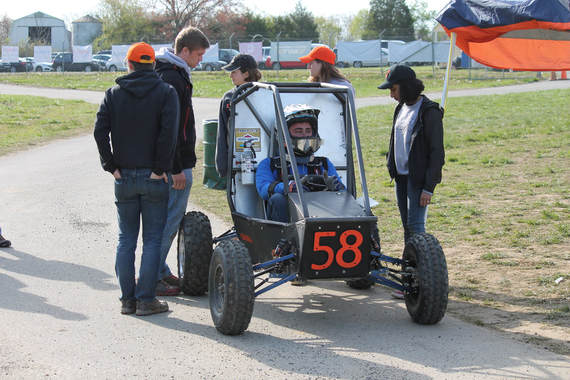 ​During our first competition in Maryland, we learned many valuable new lessons despite being less successful than initially hoped. We began the 4-hour endurance race well because of the improved performance of the manual gearbox over other teams’ conventional CVTs, especially in the context of the large elevation changes present at the Maryland track. Unfortunately, we experienced the failure of a crimp on the clutch cable during the first lap and due to the difficulty of accessing the cable, this took nearly an hour to repair. As a result of this failure, we have since replaced the clutch cable with a hydraulic clutch, which has fully resolved the potential issues associated with a clutch cable and provided a more ergonomic driver experience. We then returned to the race, but soon after the rear suspension mounts failed as a result of the rear shocks bottoming out under heavy loading. Despite mending the tabs as much as possible and returning to the track for a final time, they ultimately failed under the suspension loading of a large drop. At that point, we determined that it was not possible to satisfactorily repair the car at the competition in the remaining minutes of the race. While the Maryland competition was far from satisfactory, our experience was similar to a large number of other teams as is common during the first competition of the season. Additionally, the race provided important validation for experimental components on the vehicle such as the drivetrain.
​
During testing after the Maryland competition, we found that the designed shocks were unable to provide sufficient suspension damping to handle the loading experienced on the rear wheels. To prepare for the upcoming Kansas competition, we replaced the mountain bike shocks with the larger ATV air shocks used during previous years on the rear suspension. This eliminated the need for a rocker and the possibility of the aforementioned failure in the rear. The front of the car continued to use a rocker system as we determined that it experienced loadings that more closely aligned with the loadings seen on a mountain bike. 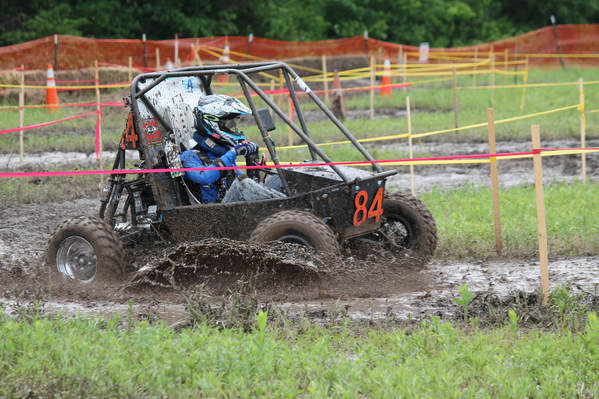 The Baja SAE Kansas competition began well when compared to the Maryland competition and competitions from previous years. Our team was able to show off several innovative vehicle components during the design presentation that caught the interest of the design judges as well as many other teams. Also, we were included in the small group of less than 20% of teams who were able to pass the vehicle technical inspections on the first attempt during the first possible day. Despite this auspicious start, dangerous weather and track conditions as well as systemic event mismanagement plagued both the early dynamic events as well as the endurance race itself. We placed unfortunately lowly in the acceleration event due to several inches of mud covering the course during our runs that a significant portion of other teams had not had to contend with. Despite the addition of the mud, the team was still able to place 32nd in the maneuverability event.

The morning of the endurance race, we were notified that the race would be shortened from 4 hours to 2 hours because of a need to fit the race between two different fronts of inclement weather. As a result of the previous weather, the track consisted of up to 6 inches of mud and standing water and presented a challenge even for the carnage crews and their ATVs. After the first two laps, we lost more than 20 minutes of the 2 hours to an impromptu, required driver change and the lack of visibility resulting from mud covering the drivers’ goggles. Over the next few laps, we experienced engine troubles caused by fuel starvation as a result of mud clogging the air inlet of the fuel tank. After temporarily resolving these issues and completing a few more laps, we experienced a small component failure in the front suspension. Finally, we were able to finish the remaining time of the race under power, but we lacked adequate time to make up any significant number of laps relative to the race leaders.