Virginia Motorsports attended the Formula SAE Competition in Michigan this year for the second time in history, finishing all events and placing 18th overall out of over 50 IC teams. 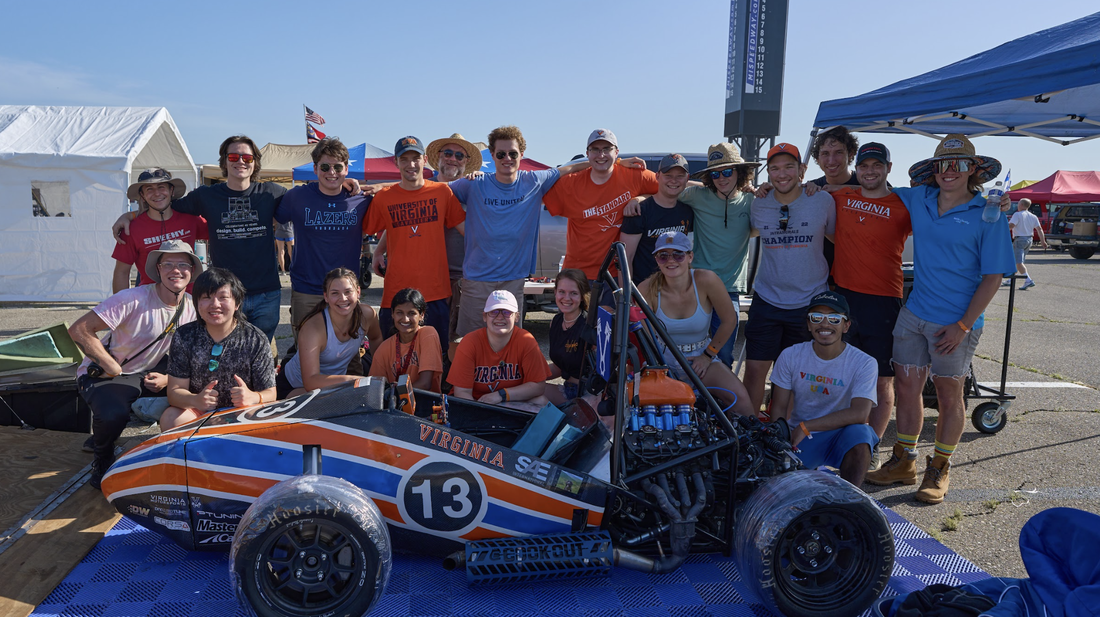 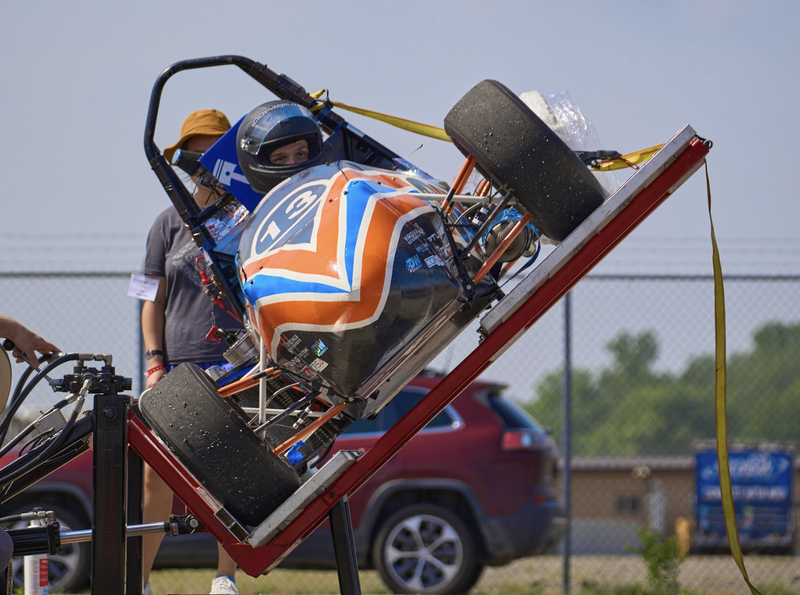 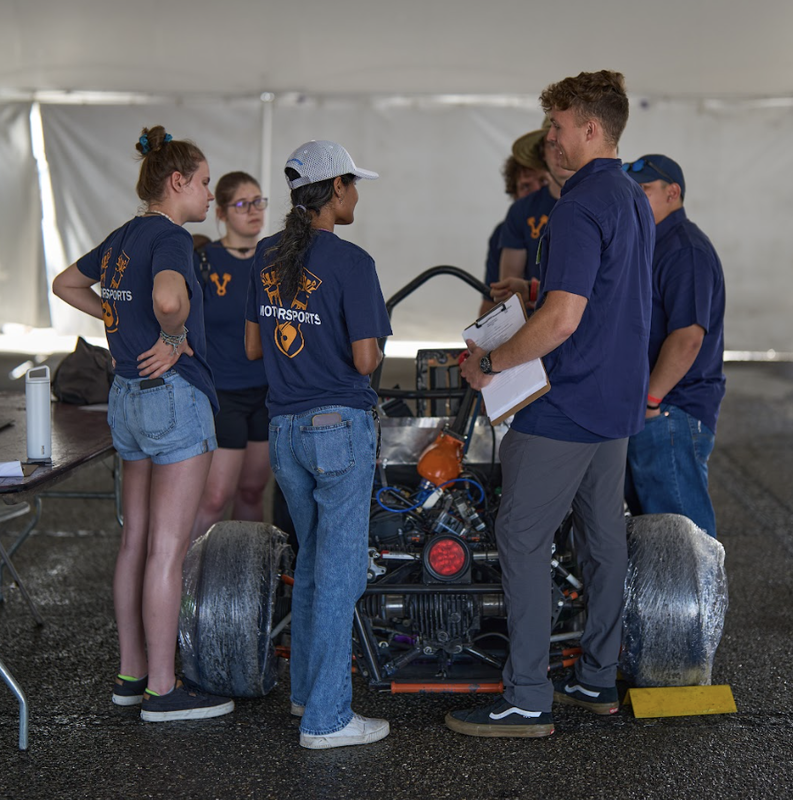 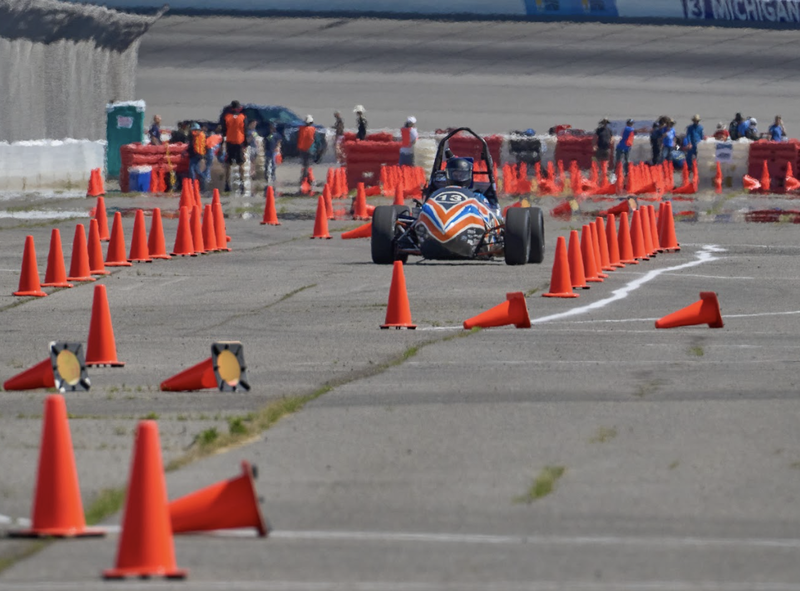 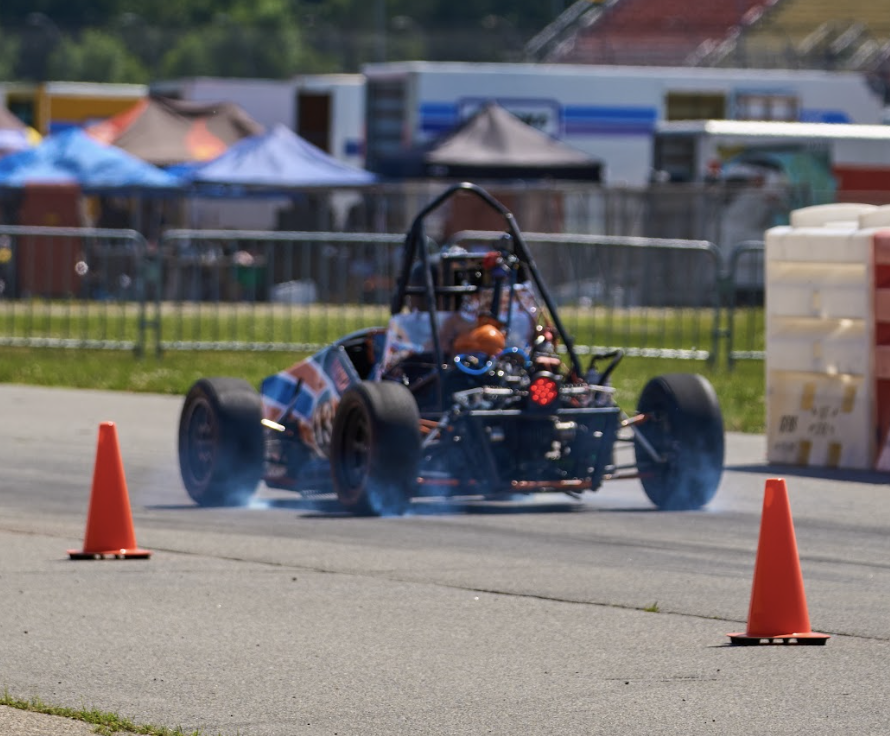 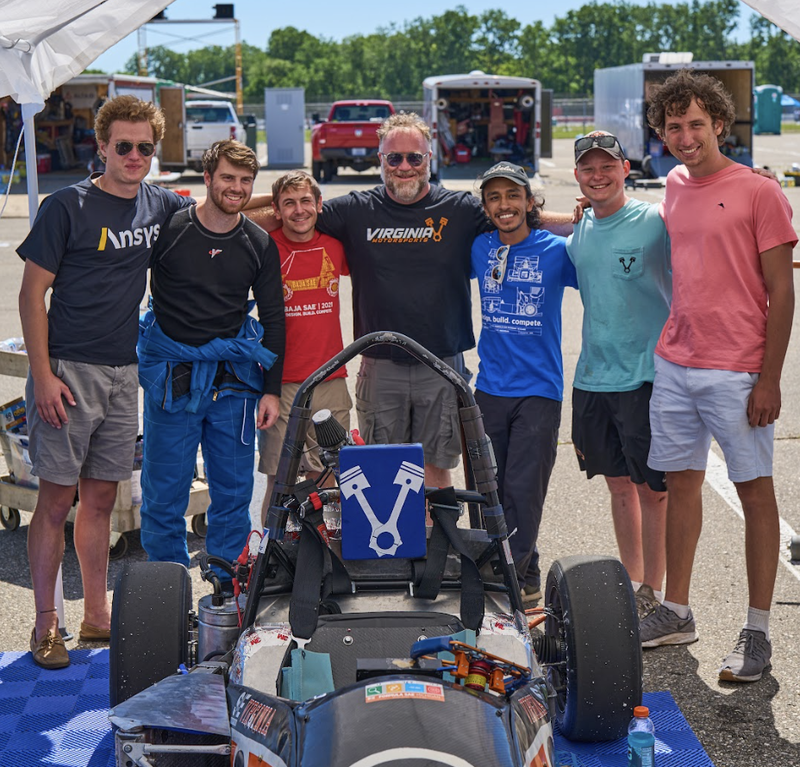 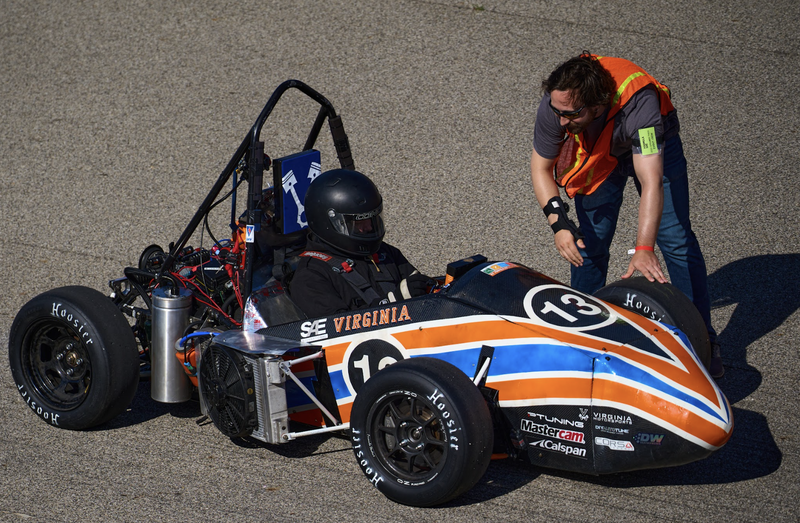 Background and Travel
Every year, SAE hosts two Formula SAE competitions for various universities to compete in by designing, building, and racing an open wheel race car. The most recent competition was at Michigan International Speedway from June 15th-19th. We brought along 22 total members.

Tech inspection
In order to run the car and compete, the car must pass a static technical inspection to ensure the proper safety precautions and engineering process went into the vehicle. Cars that don’t pass the technical inspection don’t get to race, requiring a very close reading and re-reading of the rules to ensure a smooth technical inspection.
Tech inspection started on the first day and we were 6th in line! We passed many checks but failed with small issues such as closing various panel gaps and fully sealing our firewall to protect the driver from the engine. After an hour spent fixing the concerns, we passed static tech the first day!
The second day of competition we attempted the dynamic tech inspections and passed all! To start, the car fuel tank is filled to the brim and the car is tilted to ensure it doesn’t leak fuel. We passed with flying colors on the first attempt! The next step was to ensure our exhaust was quiet enough to be within spec. Unfortunately we were too loud and passed after tweaking our exhaust tip and putting steel wool in the muffle to further decrease the noise. After passing the brake test later that day we had officially passed all aspects of the technical inspection and were prepared to race the next two days!

Dynamic Events
The first dynamic event was Acceleration, an individual, timed drag race of 75 meters. After practicing on older, used tires before competition, we were confident in our acceleration performance. After four runs, we placed 10th fastest out of 23 teams, putting up a respectable time of 4.7s versus the fastest time of 4.2s.
The next event is skidpad, which consists of driving in two circles in opposite directions and getting the average time. This event tests the pure steady state cornering ability of the car. We ended up with a best time of 5.8s despite achieving consistent 5.5 and 5.6s during practice before competition. Our new tires changed the feel of the car more than initially realized and we were hoping for a better skidpad time. To get further adjusted to the new tires, we completed multiple practice laps after both events to gauge the new boundaries and feel of the car.
Our autocross time was the true test to ensure our car is running correctly for endurance. After a track walk in the morning and discussions of how best to approach each section of the track, the final event for the day went well. The car performed well and as expected, with no problems noticed. We ended up placing 22nd out of 28 for this event.
The most important event, allowing for the most points in the competition, is endurance which consists of 11 miles of constant racing to test the durability, speed, and efficiency of our car. Our initial lap times were good but later laps slowly fell off due to the great steering effort required and the fatigue of our drivers. One of the key changes to make next year is to reduce the steering effort, allowing us to put down consistent lap times. We finished all 22 laps, signaling a successful competition! For perspective, of the 31 teams that were eligible for the endurance events, only 21 completed all the laps.

Results
We had a very successful competition! Overall we placed 18th out of the 43 Internal Combustion cars in our class! It was a fantastic learning experience as we conversed with many national and international teams, discussing solutions to various common issues in the FSAE community. With our competition performance and our new tips for improving the car, we have already started the design for next year's car! We are aiming to be even more competitive next year and build upon our strong Formula SAE start.

Sensor Use
A key to us being successful in competition is the various sensors and dashboard integrated with the car. For example, we placed well in the acceleration event as we used the dashboard to help maintain our throttle precisely at launches. We are still processing and analyzing the data from the Michigan competition and have received valuable feedback from industry professionals at the event with what to look for and how to implement our sensors more effectively in the future. While there is still significantly more data to analyze and conclusions to be drawn, we are eager to fully incorporate the results into the design of the upcoming car for the 2022-2023 FSAE season.