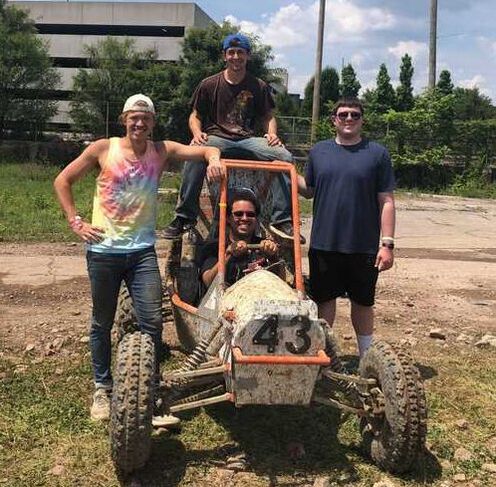 ​The nearest Baja SAE competition for 2021 was held in Louisville, Kentucky at the Drop Forge Proving Grounds at the University of Louisville. At competition, the team ran into a few difficulties at engine check because our previous engine’s idle could not be properly adjusted. As a result, a free replacement engine was gifted to the team and promptly installed, enabling the team to pass engine check. Following engine check was technical inspection, where the team was able to pass in two attempts with only minor changes needing to be made. Brake check was passed shortly thereafter, allowing the team to attempt the various dynamic events. Since this was the first time competing for our drivers, there was a learning curve to the acceleration and hill climb events. The first attempt for both allowed the drivers to become familiar with those events, which would allow improved results to be obtained in the second and final attempt.

The final day of competition consisted solely of the four hour endurance race, the biggest and most anticipated event of the competition. Just before lining up at the starting line, it was discovered that a flip the day before during the maneuverability event had knocked the brake light connection and wiring loose. While checking and testing the wiring, we noticed that the front and rear brakes had lost pressure, causing them to be inoperable. The team pulled together and was able to implement all the necessary fixes to the wiring and brake system to get the car out onto the track. During the race, all drivers got out on track to gain experience and improve our score. Unfortunately, at the end of our first driver rotation, the clutch lever mounting broke and was unable to be fixed in the paddock.

Overall, our team had a great and very educational experience at the competition. The car was able to complete 13 laps of the course, finishing 35th, with each team member playing a vital role in our success. Although there were several road bumps during the competition, the team exhibited exceptional teamwork and was able to give all members the invaluable experience of working on and repairing the car during competition. The team also learned a great deal from the mechanical issues it faced during competition and will use this experience to improve the car even further going forward.